The Argan tree, botanically referred to as Argania Spinosa in all sense is a rare and special tree popularly found in the semi-deserts of southwestern Morocco. Although the Argan tree can also be found in Algeria, some parts of Israel and Jordan, it is in Morocco that the largest chunk of this protective tree covering about 800,000 hectares in the country can be found.

Apart from the multiplicity of its uses, the Argan tree is particularly a sight to behold thanks in large part to the hordes of goats that normally dotted the trees especially during the late spring and early summer period. 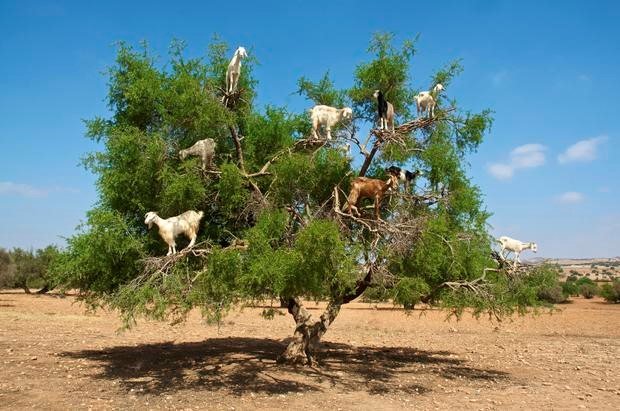 No doubt, desert and dry land cover a significant portion of the Kingdom of Morocco but for several centuries, the argan forests have been valuable in protecting Morocco against the expanding desert.

Apart from this value provided by the argan forest, the argan tree is also useful in the production of argan oil which has beneficial properties and served both cosmetic and culinary purposes including hair care products and skincare as well as serving several medicinal properties. Argan oil is in much demand in several parts of the world due to the benefits it offers.

In the same vein, the argan trees support thousands of people in Morocco in terms of employment and livelihoods.

Every year, especially in and around June, the argan trees produce fruits pulp which attracts the goats to the trees. The cloven-hoofed goats acrobatically climb the tree as if they have an understanding with the tree. Once they hopped up, they stay on the branches to savor the sweetness of the fruits.

They also eat the leaves. But these goats cannot digest the nuts. Thus, once they eat the pulp, they will swallow the nuts which will pass out of their bodies during excrement or by vomiting. These nuts would then be gathered for the production of argan oil. People gathered to crack these nuts open and then, roast, ground or mashed the kernels to produce argan oil. This used to be the traditional means of producing argan oil.

Nowadays, the work is done manually by people, especially women. This practice is laborious and labour intensive. The mechanization of the process is still in the pipeline as the kernel is delicate and could be damaged in the process. This certainly is the reason why the argan oil is one of the most expensive oils in the world, if not the most expensive. 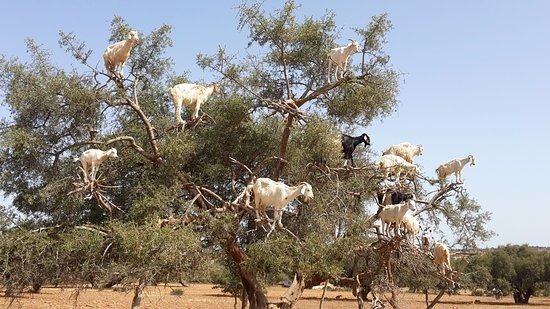 It should be noted that farmers were not oblivious of this practice. In fact, the farmers encourage the goats to climb the trees to make some quick profits from tourists. Also, to make more income, some of the farmers invested in the purchase of more goats which they rear for the purpose. Most popular destinations of this pleasant sightseeing include Agadir and Essaouira in Morocco.

The Argan trees grow to 8–10 m (26–33 ft) high and live up to approximately 200 years. However, as exciting as the sights of the goats are, excessive climbing of the trees by goats often stunts healthy growth of the trees. UNESCO listed the area as an international biosphere reserve in 1998.