Our Voices Matter Face2Face Africa is black owned and operated. Help us remain independent and free with as little as $6.

Nduta Waweru considers herself a reader who writes. Like a duck, she’s calm on the surface, but she’s always busy paddling underneath to get you the best stories in arts, culture and current affairs. Nduta has published a poetry collection called Nostalgia, is a YALI Fellow and a member of Wandata-Ke Network.

What do you do if you want to move a precious mummy from one country to another? Well, you give it a valid passport.

This is exactly what happened to Ramesses II, one of Ancient Egypt’s powerful pharaohs. He was set to travel to France and therefore had to get the proper travel documents, including a valid passport.

But who was this king and why did Egypt have to grant him a passport?

Born in 1303 BC to Pharaoh Seti I and Queen Tuya, Ramesses II, named after his grandfather Ramesses I, became regent at the age of 14.  Before that, his father named him a captain of the army at just 10 years old, when he had just started his military training. 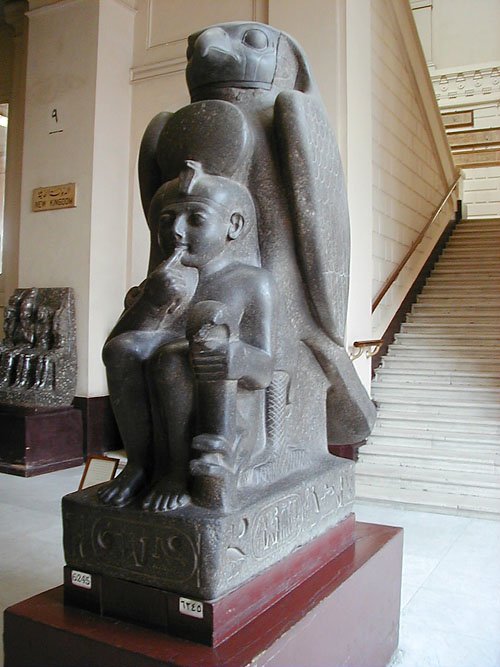 As Prince Regent, he started accompanying his father on military expeditions and gained experience as a leader and strategist.

When his father died in 1279BC, Ramesses II ascended the throne. In his first years as king, he immersed himself in extensive building projects including building cities, monuments and temples.

He also led a number of military campaigns to protect Egypt’s borders from invasion. Some of the notable campaigns include the battle against Sherden sea pirates, who were wreaking havoc on Egypt’s Mediterranian coastline.  He also led a number of campaigns against Syria, but later got into an agreement with the Hittite king in 1274BC to end all hostilities and establish peace between the two nations.

Ramesses II in the battle against Syria. Photo: Wiki CC

Ramesses II ruled Egypt for 66 years, making him one of the longest-ruling monarchs in the Egyptian empire. He held at least 13 Seb Festivals, a ritual that puts to test Pharaohs who have ruled for 30 years to gauge their competency and to renew their strength. After the first Seb, the pharaoh is free to hold as many sebs as he deems fit. Ramesses II held a seb after every two years, totalling to about 13 or 14 festivals.

It is reported that Ramesses II had nine wives and many concubines, with whom he had at least 100 children. Nefertari Meryetmut was his principal wife until the 24th year of his reign when she died. She is said to have held an influential position in her lifetime and was depicted in images to be the same size as her husband. 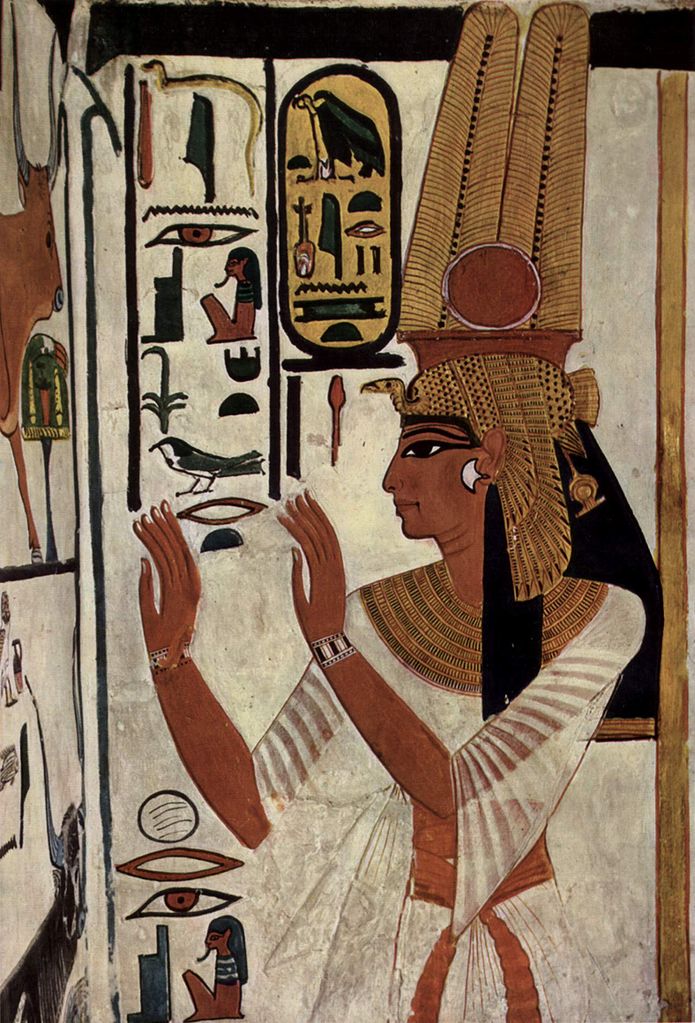 This pharaoh died in 1212 BC at 90 years old. He suffered a number of age-related problems including arthritis and hardening of arteries. At the time of his death, Egypt was a prosperous and peaceful nation.

Upon his death, his 13th son, Merneptah, became king at 60 years old.

Ramesses  II was buried in the Valley of Kings in tomb KV7. However, because of looting, they had to move his mummy twice: first to the tomb of Queen Ahmose Inhapy and seventy-two hours later to the tomb of the high priest Pinedjem II.

In 1974, Egyptologists noticed that the Great Pharaoh’s status was rapidly deteriorating and they decided to take the mummy to France for examination.

To this effect, the mummy had to be issued a passport as it was mandatory by contemporary law for human remains to have proper identification before they could be transported internationally.

The passport listed his occupation as, King (deceased). 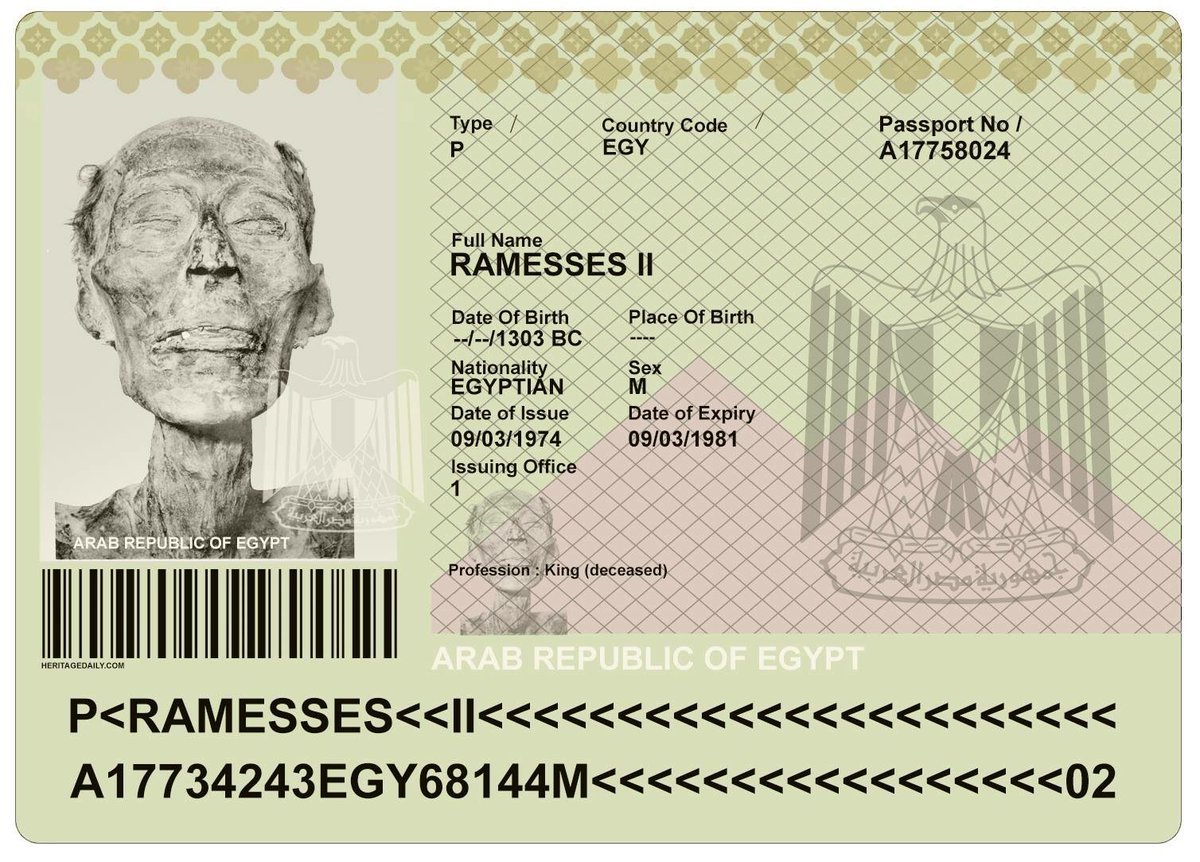 A mock up Ramesses II passport by Heritage Daily

Upon arrival at the Paris–Le Bourget Airport, the mummy was received with full military honours befitting a king. It was then taken to the Paris Ethnological Museum for examination.

The scientific analysis showed that Ramesses II had suffered battle wounds, arthritis, and a tooth abscess. He was also said to be a fair-skinned, 5’7″ man with red hair. He also apparently suffered ankylosing spondylitis, a long-term inflammation of the joints of the spine, that made him walk with a hunched back during the last years of his life.

Once his mummy was restored, it was transported back to Egypt without any problems. It is currently on display at the Egyptian Museum in Cairo.

This made Ramesses II the only Pharaoh to hold a passport in Egypt’s history.